Please note that all of the works on this site are works of fandom, and no profits are derived from any of them.

Star Trek and all of it’s related marks, logos and characters are owned by CBS Studios Inc. and Paramount Pictures.  The pages found under the Star Trek menu item on this site, and the fan-fiction contained therein and/or any promotion of materials created by the author of this website are not endorsed or sponsored by, or affiliated with, CBS/Paramount Pictures or the Star Trek franchise.

One of the most beautiful things about Star Trek is that it has become something of a shared universe, with fan works being almost as important to fans as actual canon materials.

Gene Roddenberry, the Great Bird of the Galaxy, encouraged fans to continue his dream back when Star Trek first went off the air in 1969, and attended conventions and commented on how wonderful fan fiction was.

It’s in that spirit that these Star Trek focused pages exist, and this chapter in Saavik and Samantha Wildman’s lives are being written.

While we have the new Star Trek films, and (at the time of this writing) a new series on the way, and we have some amazing novels, there are characters in Trek’s history that have never really received the attention they deserve.

For me, one of those characters has always been Saavik.  While she’s featured in a few novels, and was in three films, the character has sort of drifted into the background.

Samantha Wildman, on the other hand, while featuring in Star Trek: Voyager and a couple of novels, never received any real attention.

Both ‘star’ in this fan-novel, Star Trek: Sentinel.

The Story Bible will look at all of the major characters in this fan work, which includes the ship.

As Gene was putting together both the original Trek and Star Trek: The Next Generation, he often said the starship was as much a character as Kirk and his crew, so in writing this Story Bible I thought it was important to start with the titular ship.

Note: The technical details for the Sentinel will differ from those of the original Ambassador Class starship because in this story, the venerable but sturdy remaining Ambassador Classes (and Excelsior Classes) have undergone/are undergoing refit for the new Federation Border Defense Program, called ‘Project Sentinel’.

ADDITIONAL NOTES:
There have been a number of changes made to the second refit of the Ambassador Class, with one of the most obvious being the design of the bridge.

The most recent Ambassador Class refit has applied a modified version of the Sovereign Class bridge design. 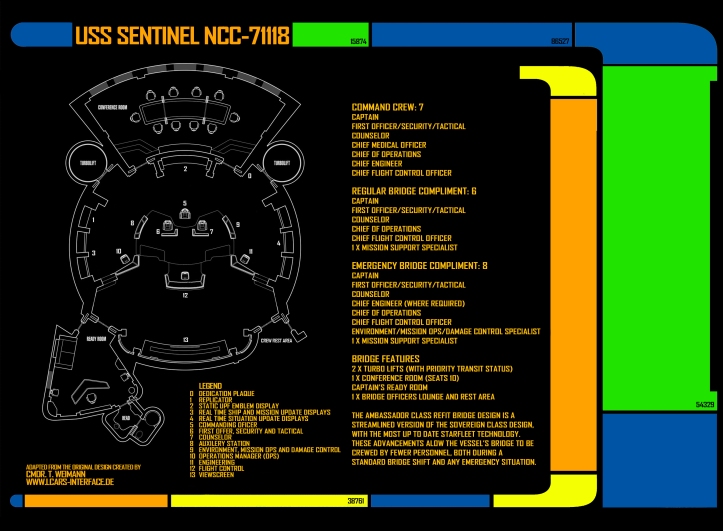 The design has been streamlined to reduce the number of crew required during a standard or emergency bridge shift.  In the original Sovereign design, a standard bridge compliment could include as many as 15 officers and support staff.  The streamlined design built specifically for the Ambassador refit has room for a maximum of eight, with the side bridge stations running along the port and starboard walls being completely automated and able to be controlled from any of the central bridge stations.

The decision to abolish manned stations lining the port and starboard sides of the bridge, made by Starfleet’s Corps of Engineers in 2385, was to enable all officers and support staff crewing the bridge to have complete access to the main viewscreen as well as access to all real time situation data (overall information pertaining to Starfleet assets) and mission data (pertaining to the individual starships’ current mission).

Additionally, ship status displays were removed from behind the Captain’s char to enhance security as that area of the bridge could often be seen in ship-to-ship communications.  Instead, now, the emblem of the United Federation of Planets is displayed.

In the new design, a port side airlock giving external access to the bridge from a docked vessel has been replaced by a crew lounge and rest area specifically for officers and support staff on shift.

General Information:
Saavik first appeared in Star Trek in the sequel to The Motion Picture, Star Trek II: The Wrath of Khan.  She quickly became a fan favourite.

The first actor to portray the role was Kirstie Alley.  In Star Trek III: The Search for Spock and Star Trek IV: The Voyage Home, Saavik was portrayed by Robin Curtis.

Both actors brought something different to the role, portraying her in a way that ensured she would receive an enduring place in Star Trek history.

Other than Saavik’s appearances in Star Trek canon, she has featured in a number of novels and other media, and details of her activities after Star Trek IV: The Voyage Home can be found here and here.

I’ve attempted to keep what made sense, and to stick with the origins of the character.

By that, I mean that in the original first drafts of the script for The Wrath of Khan, Saavik was referred to as being a Vulcan/Romulan hybrid.  That isn’t always referenced in some non- canon works.  Additionally, in one of the original drafts of The Voyage Home, there was a scene written where Saavik disclosed to Admiral Kirk that she was pregnant with Spock’s baby.  That was the reason she stayed behind on Vulcan with Amanda.  That scene was cut by Leonard Nimoy.  Even though he had originally liked the idea, when it came time to film the scene, he was reticent to do so.

While some non-canon books have taken that thread and run with it, some haven’t.  Many that did had Saavik bonded to Spock – and of interest, Rachel Garrett and Jean Luc Picard were in attendance at the ceremony!

The book in question is Vulcan’s Heart by Josepha Sherman and Susan Shwartz.

A brief timeline of Saavik’s career shows that she has been active in many of the major events that have shaped the Alpha Quadrant.

2264 – Born, Hellguard.
2274 – Rescued from Hellguard by the Vulcan vessel Symmetry, by Spock.
Unknown – Bonded to Xon of Vulcan.
2281 – Enrolled in Starfleet Academy.
2285 – Granted her commission and assigned to the USS Enterprise as a Lieutenant Junior Grade.
2285 – Transferred to the USS Grissom after the Genesis Incident.
2285 – Remained on Vulcan under the care of Sarek and Amanda when the crew of the former starship Enterprise returned to Earth to address a number of charges against them.
2286 – Gave birth to Sarekah.
2287 – Took a leave of absence from Starfleet to care for her son.
2288 – Accepted a teaching role at the Vulcan Institute for the Transmission of Vulcan Culture.
2289 – Leaving Sarekah in the care of Amanda and Sarek, she accepted temporary reinstatement in Starfleet to undertake a secret mission aboard the USS Enterprise to end the threat of an extragalactic life-form that was responsible for the destruction of the USS Farragut some thirty-two year earlier.
2290 – Returned to Starfleet and served as Helmsman.
2293 – Attended the memorial for Captain James T. Kirk.
2311 – Was present during the Tomed Incident.
2329 – Became the First Officer of the USS Armstrong.
2329 – Became betrothed to Spock.
2344 – Unofficially sent into Romulan space to retrieve Spock.
2368 – Achieves the rank of Captain and is assigned to the USS T’Pau.
2373 – Requests command of a combat worthy vessel to participate in the Dominion War.  She is given the USS Alliance, an Excelsior Class starship.
2374 – Saavik is wounded and sent home to Vulcan to heal.  While there, she accepted command of the planet’s defenses.
2377 – Led a convoy of vessels to confront the Watraii, with the temporary rank of Commodore.  She was still Captain of the USS Alliance.
2388 – Returns the Alliance to Earth so the vessel can undergo a six to twelve month refit to make it ready to join those vessels already refit and assigned to the Federation Defense Project, Sentinel.  Promoted to Commodore and assigned as Commanding Officer of the USS Sentinel.

General Information:
J’yne is not your typical Deltan, and that’s not just because he is half-human.  While in possession of the natural calm and even temperament of a Deltan, and most of their psionic abilities, J’yne also has unusual aggressive tendencies when pressed or when those he cares for are at risk of harm.

This behaviour trait is not an abnormality for Deltans.

J’yne’s mix of what appears to be a preternatural calm in stressful and/or life threatening situations, mixed with his natural empathy for others and his ability to deal with violent situations effectively, made him perfect for Security and Tactical, and eventually Starfleet’s Search & Rescue Division.

In general, J’yne is a softly spoken, quiet and reclusive individual.

Standing at 6’2″ with a fair complexion, he is powerfully built and somewhat intimidating, but has gentle eyes that belie the fact he is capable of great violence.

Like most Deltans, J’yne is bald, but he does have a full beard courtesy of his Human father.  J’yne’s father is a leading Federation scientist who fell in love with a Deltan Starfleet officer.

Raised on Delta IV by his father so that J’yne could train in Deltan mental disciplines, and so that he could learn to subdue the infamous Deltan pheremones that he most definitely inherited from his mother, he often feels more Deltan than human.  Despite his human characteristics, he is frequently confused by his father’s species.

Having embraced his Deltan half at a young age, J’yne sought to find ways to reconcile his aggressive tendencies and link it to some sort of purpose.  In trying to help him, his father introduced J’yne to the history of the Deltan people, and in particular the Oer’dai Warriors, an ancient faction of the Deltan people who, over the ages, eventually became the protectors of the Deltan people.  Embracing those legends, Jacek went so far as to follow one of their older traditions, and heavily tattooed his body to symbolise his affinity with that group.  As a result, J’yne’s arms and chest are covered in a series of black, blue and red images and symbols.

J’yne has the full empathic abilities of a Deltan, as well as their natural navigation, astrogation and advanced mathematical abilities.

J’yne’s best friend is Hasani Uhura, a young Ensign who befriended the stoic Deltan despite J’yne’s best efforts to avoid forming any bonds with his colleagues.

J’yne has a history with Saavik, having run search and rescue missions for Starfleet from her former command, the USS Alliance.

J’yne is pansexual, and his Oath of Celibacy is on record with Starfleet.

She featured intermittently throughout the series, with her daughter, Naomi, being more a focus by the writers.

An excellent character, Samantha did attract the attention of authors and game designers alike, and appears in a number of Star Trek projects.

Gentle, compassionate, thoughtful and considerate, Samantha is a nurturer and careful individual with outstanding organisation and strategic skills.

A timeline of some of the important events in Samantha’s life has been assembled from a mix of sources including Memory Alpha and Memory Beta.

2347 – Born on Ekaris III to Linette and James Wildman.
2365 – Entered Starfleet Academy where she studied Xenobiology.
2268 – Was assigned as a student instructor at the Academy.
2368 – Spent her time as a Midshipman on Ktaria VII studying that world’s jungle ecosystem.
2369 – Married Greskrendtregk, a Ktarian.
2370 – Visited DS9 to seek help from Doctor Julian Bashir in getting pregnant.
2371 – Earned her Doctorate in Xenobiology and graduated from Starfleet Academy.
2371 – Assigned to the USS Voyager, and lost with that crew in the Delta Quadrant.
2372 – Gave birth to Naomi Wildman.
2372 – Naomi died due to complications and was replaced by a duplicate thanks to a subspace accident.
2378 – Samantha and Naomi were reunited with Greskrendtregk when Voyager returned to the Alpha quadrant.
2379 – Promoted to Lieutenant.
2380 – Samantha undertook advanced intensive training in Communications, Operations and Command over a period of two years.
2382 – Samantha played a major role in revealing the conspiracy behind the catomic health crisis.  She was promoted to Lieutenant Commander and given her choice of assignments.  She chose to be posted to Ktaria.
2388 – Assigned as Chief of Operations to the USS Challenger.